Rock climbing has a strong history in the Priest Lake area. Because you can see chimney rock from the lake, many early Priest Lake visitors talked about whether or not chimney rock would ever be climbed. Mountaineers from Seattle tried to climb the rock in 1933. They were unsuccessful, but returned the following year to put a team of 4 climbers on top. The route they took has become the standard route to the top, to this day still a hair-raising trip. Chimney Rock was soloed the following year by an ambitious climber in tennis shoes. John Booth started the approach from his parents cabin at Indian Creek bay, hiking a rough trail from the lake to the base of Chimney. He climbed up and down the rock without a rope and back to his parents cabin by nightfall. This rather alarming feat would still be considered a major event even by today’s high rock climbing standards. 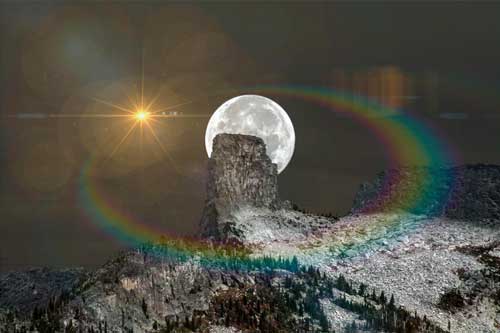 Chimney rock was virtually ignored until the early 70’s, when the team of John Roskelley and Chris Kopszynski came on the scene. This team was the first to free climb the east face. The east face is the side we can’t see from Priest Lake. This face is steeper and longer than the Priest Lake side and overhangs 15 feet at the top. As John describes it, he was lay backing up a flake when his arms tired and he started sliding down. The corduroy pants he was wearing caught on the flake just long enough for him to pound in a piton. He claims it’s the first time he realized he could die in the mountains.

There are over 20 routes to the top of Chimney Rock and 2 routes of descent. The rappel chimney on the west face is the normal route of descent and can be done with one rope. The east face descent is free hanging for most of the second rappel and requires two ropes. Both routes of descent require some easy down climbing to reach the base safely. There is also a rough climbers trail that winds around the base of the north face, providing access to the east side.

A climb of Chimney Rock is an all day outing. The rock can be reached via the Mount Roothaan trailhead. It takes 2 hours from the car to the base of Chimney Rock, and 3 to 4 hours to complete the climb. A guidebook is available from Keokee press that describes the approach and the climbing routes. The book is called “Climbers guide to North Idaho and the Cabinet wilderness” written by Thaddeus Laird.

A local climbing area within 20 minutes of Priest Lake that is easily accessible is Granite Pass. Granite Pass is located on Idaho highway 57 about 12 miles north of Nordman and one mile north of Granite Falls. The road passes through cliffs that are 50 feet high. Easy to rope or lead climbs are found on both sides of the road. You can park next to the climbing and easily walk around the back of each cliff to set up top rope anchors. Most of these anchors consist of large trees, but some chain anchors are in place.

The classic route here is Spider in the Crux, a bolted sport climb that was first climbed in 1995 by Charlie Sassara. This striking line is located on the buttress on the right side of the road as you drive north. It was top-roped for many years by slinging 2 large boulders at the top for anchors. Local bolters equipped the route, but before they could complete the first lead of the climb, on a warm August evening, Alaskan ace and climbing guide Sassara led the route.

The newest area to be developed is Lions Head. This granite spire is twice as high as Chimney Rock and just as steep. Charlie Sassara was on scene here as well, establishing the first ascent of the west face, a climb he calls The Fugitive. The north face route, a route called Lion Tamer, is the longest climbing route in the Selkirk mountains. Only a handful of climbers have ventured onto the north face, a free climb since 1991.